Head Coach Anthony Belber said, “It was a stunning and deep team performance” on Saturday during which the 9th/10th grade men’s team also finished with “a near perfect score of 16,” the Varsity B (JV) team won their race, the Men’s Varsity team finished second in the Mid-Atlantic Athletics Conference (MAC), and the Women’s Varsity B (JV) team claimed fourth.

Unlike in most sports, all 15 ISL cross-country teams race against one another in one division, rather than splitting into upper and lower divisions. On Saturday, GDS competed against the 14 other ISL teams (two ISL schools did not field full teams).

“Team” is the critical word in each of these events, especially when most people tend to think about the individual effort in the sport of running. In cross country, a team’s score is the sum of the rankings of the top five finishers of a seven-person team and the lowest score wins. In the ISL Varsity race, GDS’s top three finishers—Ellie Kessler ’24, Audrey Leff ’25, and Sadie Boyle ’25—had excellent, season-best results; and yet, as a group, Georgetown Visitation’s top three beat them for a lead (a 12-point-lower score) as the first dozen runners crossed the finish. That’s when the strength and depth of the GDS team kicked in.

That’s when the strength and depth of the GDS team kicked in.

Four (of the five) cross-country co-captains of the combined coed team sat together to reflect on the championships: Seniors Izzy Auerswald, Luke Cohen, Noor Ramzy, and Ethan Wolin. (Daniel Otto-Manzano was unavailable to join.)

“We might not have the top three fastest runners, but we do have seven really strong runners,” Luke said. “That speaks to the fact that our coaches focus on each and every member of the team equally, not giving more attention just to top runners. It really is a whole team. We all train together. We all work hard together.”

Junior Ellie Kessler led the ISL team with a season best 20:28 on the challenging 5K course. In fact, all seven runners had season-best times. Next to finish were four sophomores in a series: Audrey Leff—just 15 seconds behind at 20:43—Sadie Boyle—still within 30 seconds at 20:57—Julia Young at 21:39, and Naomi Borek at 21:42. Senior Sadie Foer and sophomore Nora Sachse brought the ISL banner-winning team home, crossing the finish line together at 21:56 and 21:57, respectively.

Co-captain Izzy Auerswald ’23 said the women’s team was “seated fifth in the ISL but got first. We were underestimated.”

Luke noted that while the team outperformed expectations, the win was “not necessarily a surprise.” “Everyone on the women’s team raced really really well and it was a great weekend,” he said.

Noor added, “They’ve been racing well all season, and we knew they are a strong team. I think that’s important to emphasize. We knew they were really strong and really worked hard.”

Ethan pointed out that the only other time GDS won the ISL championship, which was in 2015, it was a team of mostly juniors and seniors, including multiple future D1 college runners. “Having such a young team do it the second time is amazing,” he said.

GDS continued to show its depth in the MAC division. As defending MAC champions, the GDS team faced an outsized opponent this year in the Potomac School, who fielded two nationally ranked runners, including the top-ranked runner in Virginia (11th in the nation). Yet, GDS still managed a strong second place finish with only an eight point deficit—impressive considering the Potomac runners went one and two in the race. Ethan Wolin and Luke Cohen quickly answered back with third and fourth place finishes. Then, not only did all seven runners finish in the top 20 of the varsity race, but the next seven men won the Varsity B race in dominant fashion (25 points), securing four of the top six places. Finally, in the men’s 9th/10th grade race, GDS runners won again with a near-perfect score of 16, claiming first through fourth and sixth (plus non-scoring seventh and tenth), pushing the second-place Sidwell to nearly four times GDS’s score.

In the Men's 9th/10th grade race, a pack of four freshmen led the GDS team: Simon Kessler (18:53) then, just a second behind, Noah Kolker and Oliver Wolin, both with season best finishes (separated by six-hundredths of a second at 18:54), and Oliver Malkin at 19:10.

Hover over the image below to scroll the gallery, or view on Flickr. (Article continues below.) 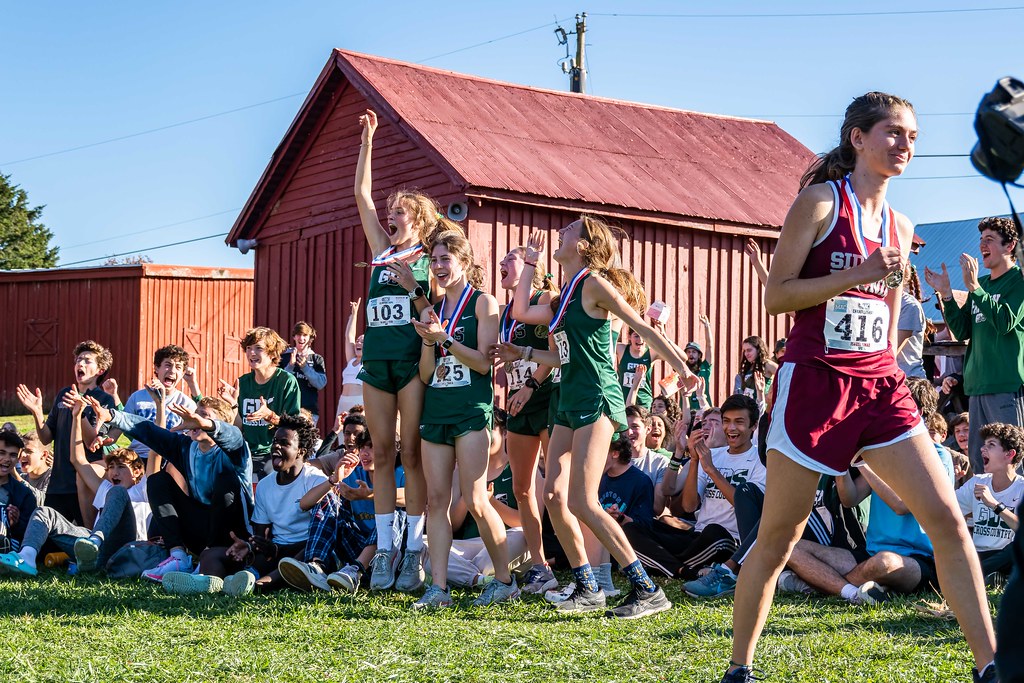 The GDS fans turned out in huge numbers, despite the long ride out to the Agricultural History Farm Park (affectionately called the Fark) in Derwood, Maryland.

Ethan said, “I’ve never seen more GDS spectators show up to any GDS meet in my time running in the High School in the past four years, and it was amazing to feel the support from the fans.”

The cross country program, Izzy explained, is a “very close-knit community.” Ethan mentioned seeing alumni runners and other affiliates of the program spectating on Saturday, some that he hasn’t seen since the August pre-season cross country camp. Having so many spectators—not only current and alumni runners but also many others from outside the running programs—was an exciting experience for the team.

Typically, the cross country team will go away to a meet, sometimes an hour away, and come back to talk about it. This time, so many people will have been able to see it for themselves, and “hopefully grasp the gravity” of the results, Izzy said.

Having raced on this same course just one week before in much warmer temperatures during the Skip Grant Invitational, assistant coach Amanda Deringer noted the athletes’ increased confidence about how to run the race. “It’s a really positive, supportive group of kids, who had a great day,” she said. “It was beautiful and so much fun.”

“[There are] season best times everywhere you look, including from 18 of 48 men’s team finishers and 15 of 24 finishers in the women’s race!” Anthony said. “It is not an easy course upon which to race a fast time; our runners were just running that hard.”