IT'S SNOW WONDER...GDS is the place where students love to learn.

When several inches of snow fell on the region just days after ringing in the new year, the playfulness of the GDS community—and a love of joyful learning—was on full display. Below we share a few of the ways community members played in and learned with the snow.

First though, we want to extend our thanks to the GDS maintenance team, who worked long hours in the cold to ensure our campus remained safe and accessible, including during one of our return-to-school testing days when the flakes first began to fall.

Lower School science teachers Eric Friedenson and Kathleen Dawson began developing a framework for PK/K students to understand Newton’s Laws of Motion. Lower School Principal Cami Okubo had the opportunity to join them on the slope by the Not-So-Secret Garden and “loved every moment” of the outdoor, experiential learning activity with our youngest Hoppers. Thanks for capturing their experience, Cami!

Eric explained: “In science, PK/K students began developing a framework for understanding Newton’s Laws of Motion by observing sledding plastic lions. Law #1, “Objects in Motion stay in motion until acted on by an outside force,” was on full display. Bundled up in their hats, coats, boots, and even snow pants, students made observations and hypotheses about where the toy lions would start and end up in a sled when it slid down the hill. With wonder, smiles, and giggles, students saw that the lions, which started in the back of the sled (because sledding was scary for them since they had never seen snow before!), remained in the back of the sled for almost the entire ride.  Only when the sled reached the sidewalk, did the sled slow down, but the lions kept going forward. When the sled slowed down slowly, the lions would end up in the middle or front of the sled. However, when the sled slowed down more quickly (or even crashed into a box or a classmate’s leg), the lions kept moving quickly and flew right out of the front of the sled! Whoa!”

Middle Schoolers reveled in the invitation to pelt the GDS Storyteller with snowballs and take group photos in the snow.

We also captured some of the rad (and reckless) at-home activities that families and faculty/staff shared from their snowy January 3. Not everyone made the wisest choices but thankfully everyone stayed safe. Needless to say, we hope the results from our polling (you’ll need an Instagram account) will lead you to make the best decisions for future snow playtimes. 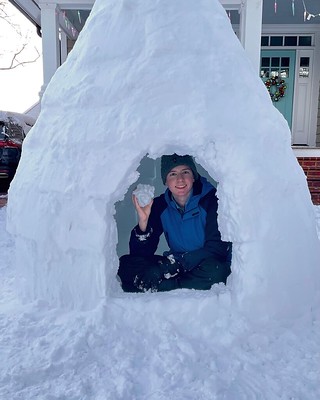